Get Set for Winter!

The weather in my part of the world has been most inclement all summer long!  Sunshine? What's that?! Anyway I found a pink cw of La Vie Du Grand Nord which looks nice and icy ready for winter! 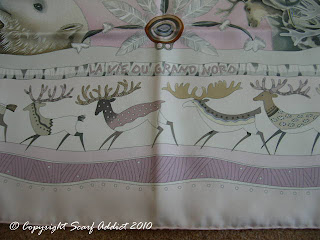 There are lots of lovely Arctic animals and Eskimos in this design. 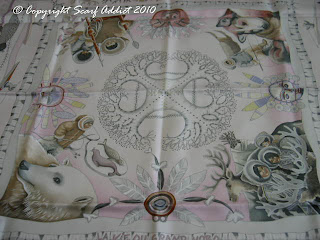 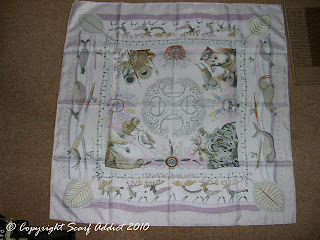 I have not played with the scarf too much yet but in the basic bias fold you can see the polar bear and husky dog quite nicely. 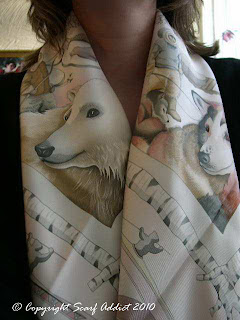 After seeing 2 performances of Le Corsaire, my favourite ballet was next - Don Quixote! 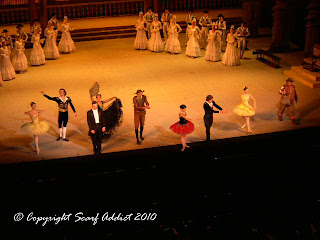 This ballet can be relied upon to being a smile to any face with its wonderfully virbant, happy, music (Minkus) and the sunny story of Kitri and Basil who love each other but Kitri's father is determined she should marry a wealthy nobleman, the hapless Gamache.  Long story short, Don Quixote goes on his travels to find his Dulcinea and on arriving in Barcelona finds Kitri is her exact likeness, thus liking Kitri DonQ helps her to marry her true love Basil! All ends happily ever after! 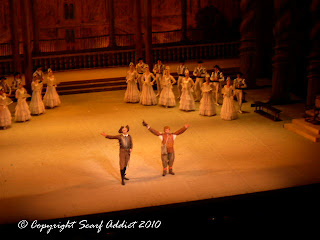 Shown above are Alexei Loparevich as Don Q and Alexander Petukhov as Sancho Panza.
This is a real "show off" ballet with fabulous jumps and high speed turns throughout. My favourite stars Natalia Osipova and Ivan Vasiliev (who I have seen before but who have now matured) danced 2 performances and I have never seen anything like it in my life -nor has the Royal Opera House! The audiences went wild with excitement and I don't think the two young dancers could quite believe the storm they created. It was truly amazing stuff and the reviews in the newpapers bear this out.  It was certainly an occasion to say "I was there"...what a thrill! 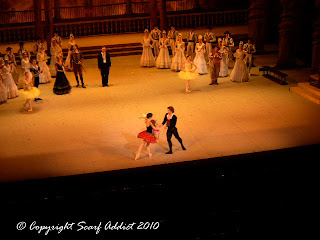 Ivan performed amazing high jumps and Natalia demonstrated high jumps and super fast turns - it left one breathless just watching!  Yet in the middle of it all comes the Dream Scene and this is a beautiful piece of ballet, drawing a gasp from the audience when the curtain rises on the exquisite scene.  It requires a dramatic change in character for Kitri as she assumes the role of Dulcinea in Don Q's dream, Natalia pulled off this change with ease and it was a pure classical dream to watch her.  Add to this fabulous costumes and I was in ballet heaven! 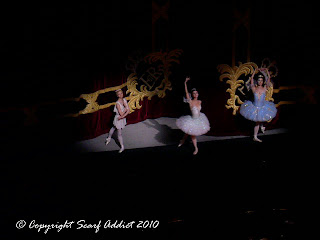 Left to right, here are Nina Kaptsova as Cupid, Natalia Osipova as Dulcinea and Maria Allash as Queen of the Dryads.
And below Natalia and Ivan at the curtain call on Sunday, where I was closer to the stage. 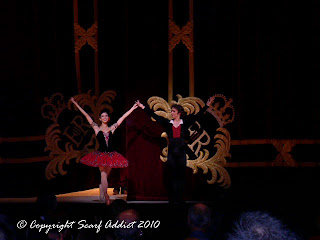 The other performances I saw were also beautiful, but not as quite exciting as the 2 given by Natalia and Ivan.  At the Saturday matinee there was a lovely flower throw - something you do not see very often, and more usually when a dancer retires, however this was a mark of appreciation for a wonderful season - you can just see the flowers at the feet of Ekaterina Krysanova and Andrei Merkuriev:- 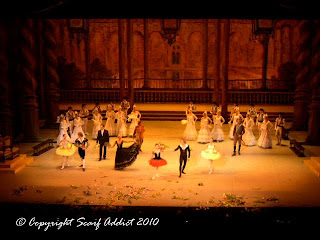 On Saturday evening I saw a lovely performance by Marianna Ryzhkina and Mikhail Lobuhkin and I loved how Marianna took her curtain call en pointe - every inch a prima ballerina! 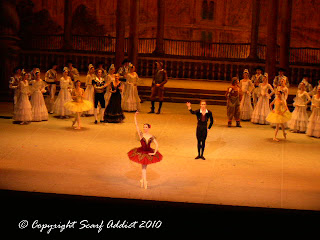 I believe we have to wait 2 years now for a return visit, but hopefully I will be able to catch the Bolshoi somewhere else in Europe before then :-)
Posted by @Scarfie1 at 13:01 6 comments:

Over the last 3 weeks London was home to the world famous Russian ballet company The Bolshoi.  The 2010 London Season certainly showed a company on sparkling form.  I attened many performances and 2 in particular have left me truly stunned: Spartacus on 31 July and Don Quixote on 6 August.
The first visit I made was, however, to Serenade and Giselle a double bill.  Sadly the dancer originally cast for Giselle was Natalia Osipova, but was she switched to the opening night due to the injury of the leading ballerina Svetlana Zakharova, so instead I saw Anna Nikulina.  It was a nice performance but the reviews of Natalia Osipova's performance show that I missed the best one! Anyway I enjoyed it and that was the main thing - here a pic of Anna as Giselle with Alexander Volchkov as Albrecht. 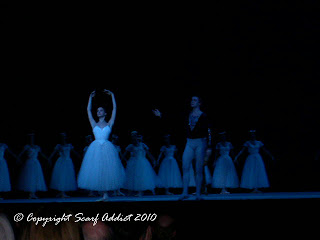 The second ballet I saw was Spartacus, often referred to as the Bolshoi's "calling card".  It is a truly spectacular piece, especially when cast with the right dancers and I was lucky to see the young upcoming star of the Bolshoi, Ivan Vasiliev, in the title role - just 21 years of age he has taken to the role as if born for it and I am still incredulous at the height and speed of his jumps!  It was a real thrill to see Ivan in this performance and he brought the house down!
In the photo you can see left to right: Nina Kaptsova who played Phrygia (Spartacus' wife), Ivan Vasiliev as Spartacus, Maria Allash as Aegina (Crassus' wife/partner)and Alexander Volchkov as Crassus (Spartacus' arch enemy). 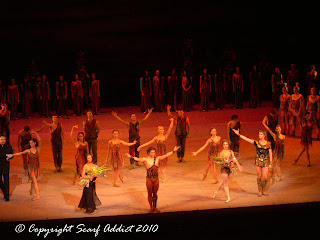 I will post some more pics another time of the other shows I saw.
Posted by @Scarfie1 at 19:48 4 comments:

Well I have been up and down the country to and from London - 5 times in 2 weeks - so now I am totally exhausted!  The reason - the Bolshoi Ballet were visiting but more of that in another post.  For once I did a few touristy things - which is always nice to do! 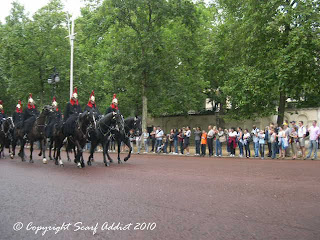 On my way to Claridges to attend an Afternoon Tea Masterclass my taxi went up The Mall just in perfect time to see the Horse Guards on their way from Buckingham Palace to Horse Guards Parade to Change the Guard.  As it had rained the soldiers had their capes on - but don't they look regal and spectacular?   I saw them again on one of my later trips and I will post some pics later as I have not resized them.  It is amazing to think these guys are serving soldiers and serve out in Afghanistan as well performing ceremonial duties like this.

Anyway I was going to Claridges, famous for their afternoon tea, but this visit was to attend a masterclass with the Head Pasrty Chef.  We got see him make macaroons, creme patissiere, cream slices and scones.  When you see an expert like Chef make the macaroons you realise just why they are so expensive to buy in the likes of Laduree - not only are the best ingredients used, but the process is very labour intensive, so next time you bite into a macaroon spare a thought for the artisan who made it!
After we saw the cakes being made we were given a nice lunch with wine:-
Clockwise from the top right - goats cheese and raspberry and beetroot, red mullet with beans and butternut squash jus, a warm terrine of chicken with spinach and wood sorrel leaves, and a tomato risotto (yum). 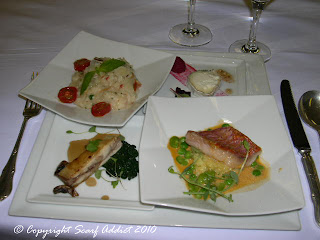 After the lunch came the afternoon tea goodies!!  Here is the full selection presented on a long silver pewter "tray" and you can see the scones in the background. 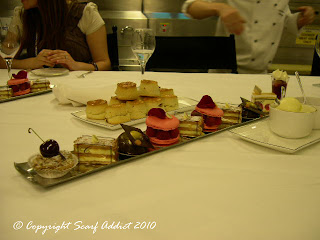 Here is a close up of a Cherry Streusel tartlet - it was delicious!! Note the attention to detail in the chocolate drop with a "C" for Claridges on it! 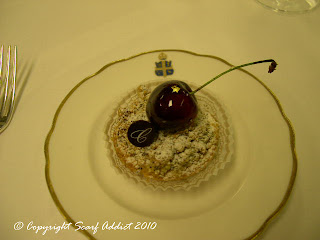 And here are the other cakes closer to:-
Cherry Streusel tartlet, cream slice, chocolate dome mousse which had an oriental fruit in it (I can't recall the name but it was similar to orange), and a rose flavoured macaroon.  Clear jam was used to immitate rain drops on the rose petal! 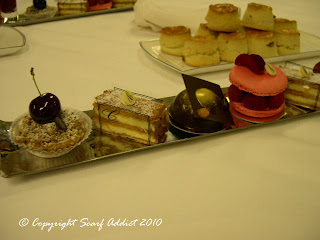 Claridges offer Masterclasses on lots of different subjects like game, carving, fish, flower arranging and chocolate etc.., but I have only ever done the afternoon tea....hmmm I wonder why??!!
Posted by @Scarfie1 at 16:57 6 comments: