Here is a link to my Friendship Knot Video and other instructions which may help you master this super knot!
Posted by @Scarfie1 at 19:43 17 comments:

I saw a beautiful tree yesterday so I took my camera with me to work today and managed to get a photo - luckily the sun was shining again and the sky was blue. It was one of those "isn't Mother Nature wonderful?" moments and I thought I would share this lovely tree with you. 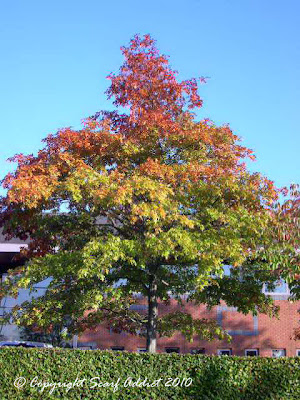 It is amazing how the colours go from green at the bottom through yellow and orange to red at the top.

Over on TPF the theme for the last week was "Point Me to Your Pointu" giving us the excuse to wear our pointu scarves.  ﻿﻿
﻿﻿

I have 4 pointus and had some fun wearing my Les Cles this week and taking some photos of my others for the thread.


The pointu is simply a triangle shaped scarf but recently Hermès seem to have stopped making them except for one per season made from unusal fabrics :-( The Pointus are particularly easy to wear being so much smaller and less voluminous.


I secured the scarves using my new horn scarf ring from the MaiTai Collection which saves making a bulky knot - much more comfy to wear!  These rings open up a lot more possibilities for wearing your scarves - I just fed each scarf end through the ring and pulled to the length I required. 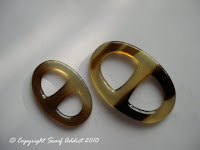 ﻿
The last pointu that I bought was this lovely pale blue pointu version of the Hermès classic design Couvertures et Tenues - I pulled the tied ends to the side which adds interest to the scarf.
Always one to experiement with my scarves I decided to put 2 pointus together (wrong side to wrong side)with the following results - I have done this in the past as well.  They are so light it is not a problem wearing 2 together in this way.
﻿
Posted by @Scarfie1 at 10:33 7 comments:

In August I was able to fulfill an ambition to visit the Prince of Wales' gardens at Highgrove House in Gloucestershire.  It was a rather wet and windy day, but that did not spoil the visit.
Photo: www.highgrovegardens.com 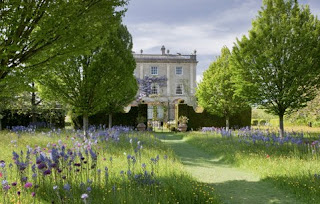 Photography of any kind was strictly forbidden in the gardens, so the pictures here are from the Highgrove Gardens website unless otherwise noted.
Photo: www.highgrovegardens.com 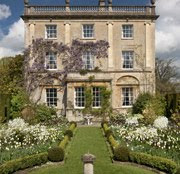 I really liked the Sundial Garden - you can just make out the sundial at the bottom of the photo - this sundial has suffered badly in the winter just gone as the foot of it has broken up on one side. The garden is now more colourful than in the photo - it had a black and white theme for a long time but this year the Prince introduced some colour so there are now pinks and purples in the garden as well.

The late Princess Diana sat on the sundial base for a portrait by Tim Graham in 1985/6.
Photo: Tim Graham/Getty Images 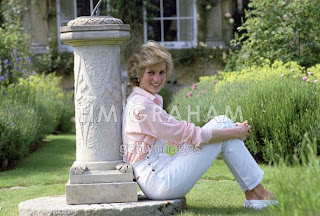 Near the house is the Thyme Walk although we did not get to walk along it - the topiary bushes are fabulous!  Each of the Prince's 12 gardeners was given a bush to sculpt into whatever shape they liked and there are some very clever designs - here a topiary crown!
Photo: www.highgrovegardens.com

In the Arboretum and Sanctuary Garden is Prince Charles' sanctuary.
Photo: www.highgrovegardens.com

In this area is a fabulous sculpture by Frederick Hart called "Daughters of Odessa" - and I think this was my most favourite sculpture in the whole garden - it is said to be inspired by the children of the last Tsar of Russia who were all murdered during the Russian Revolution.  The Tsar's 4 daughters, Olga, Tatiana, Maria and Anastasia, comprise the statue and in the pouring rain I loved how the rain drops dripped from the ends of their fingers, it was utterly charming.  I found a picture of a replica.
Picture http://www.jeanstephengalleries.com/daughtersofodessa.jpg 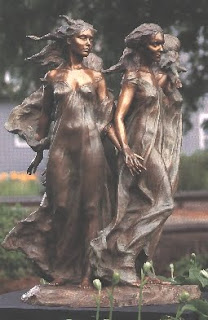 The tour took us to the Walled Kitchen Gardens which are laid out in 4 quadrants - 2 are after the Scottish Saltire Flag in an X design and 2 after the English Cross of St George Flag in a + design.  The paths are covered in archways of apples and fruits and sweet pea flowers.
Photo: www.highgrovegardens.com

The Mediterranean Garden was very nice and had a fountain and pond with carp fish and you can just make out some of the large sherry urns that adorn the gardens.
Photo: www.highgrovegardens.com 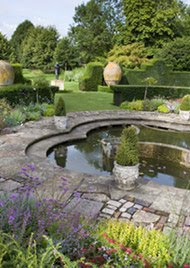 The best was saved until last as the last garden to see was the Carpet Garden which was a recreation of the Prince's entry at The Chelsea Flower Show in 2001.  This was truly spectacular!
Photo: www.highgrovegardens.com

﻿
Next year I hope to return to Highrove earlier in the gardening year so as to be able to see the famous flower meadows in bloom.  Prince Charles is quoted as saying that Highgrove "...has gradually become a garden which delights the eye, warms the heart and feeds the soul" - I think he has certainly achieved this.