There has not been a lot to post about lately, but I have a few trips planned in July when I am on holiday so I am looking forward to that.

The new season Hermes scarves are starting to trickle into some boutiques - but not to any near me!!  My nearest one advised August or September for the new ones - that is a long wait when you can get some online already as well!  So far I am most interested in one called L'Ivresse d'Infini by Zoe Pauwels.


I love this purple colourway with its turquoise hem as it looks like it ties really well!!  So, I will be trying to find one when I go to Paris next week as well as trying see what designs are on offer in the 70cm vintage size.  Seeing as Hermes have very cheekily increased UK prices I hope that it will now be cheaper to buy in Paris.  Isn't one price rise a year enough for Hermes?  They do annoy me.

Today I was pleased to see the Duke and Duchess of Cambridge attending an Armed Forces Day event at Windsor where they presented campaign medals to the Irish Guards.  The Duchess wore a suitably military outfit (believed to be Burberry) and I thought she looked great!
Photos: Daily Mail

She was slo wearing a new gold bracelet with a gold disc engraved with a crown and her initial, "C". 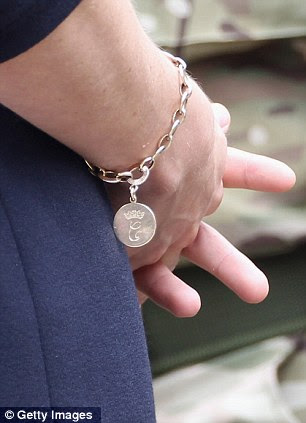 Princess Diana had something similar as I recall.

The Duke and Duchess will be off on their tour of Canada and the USA shortly so it will be interesting to see how that goes.  They have released a lovely new portait to commemorate the trip - it was taken in the grounds of Clarence House on Friday 3 June 2011 and I think it is really nice.
Photo:Chris Jackson/Getty Images

Next weekend on Friday and Saturday we see the royal wedding in Monaco of HSH Prince Albert and Charlene Wittstock - she is reported to be wearing an Armani wedding dress and rumour has it that her gift from the Prince will be a new tiara - can't wait to see that!!  Luckily we have european satellite TV at home so I should be able to see the wedding on one of the French or German channels as I am sure the UK TV will not show a thing - they never do and we live in Europe!  That so annoys me too!  I will be buying Paris Match and Point de Vue magazines when I am in Paris as their coverage of such events is always very good - their coverage of the UK royal wedding was great - they always have great photos and I am sure Hello! won't let me down either LOL!
Photo: www.palais.mc

Following the Monagasque royal wedding the Grimaldi Forum's annual summer exhibition is going to be focussed on 20 European Royal Courts - it looks like a must see for me so I will have to get a trip to Nice/Monaco sqeezed in!  You can read about the exhibition "Fastes & Grandeur des Cours en Europe" HERE

I will be sure to post after my trips!  Hope you are all well and enjoying the summer if you are lucky enough to live somewhere that you get some sun and warmth!  It's not too great here at the moment!!
Posted by @Scarfie1 at 17:20 2 comments:

Well I had a little time to spare on my trip to the ballet yesterday and seeing as it was Trooping The Colour day (celebrating the Queen's "official" birthday) I headed to The Mall as it was not far from the theatre.  There were lots of people there.
Here is the view from Admiralty Arch. 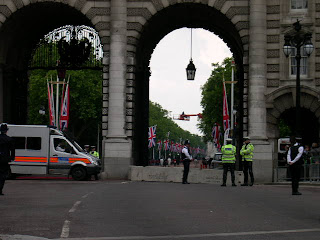 I only managed to see the back of Kate and Camillas' heads LOL!  I could see Kate was wearing white and a black hat, but I was not able to get any photos myself so here is one from the Daily Mail. 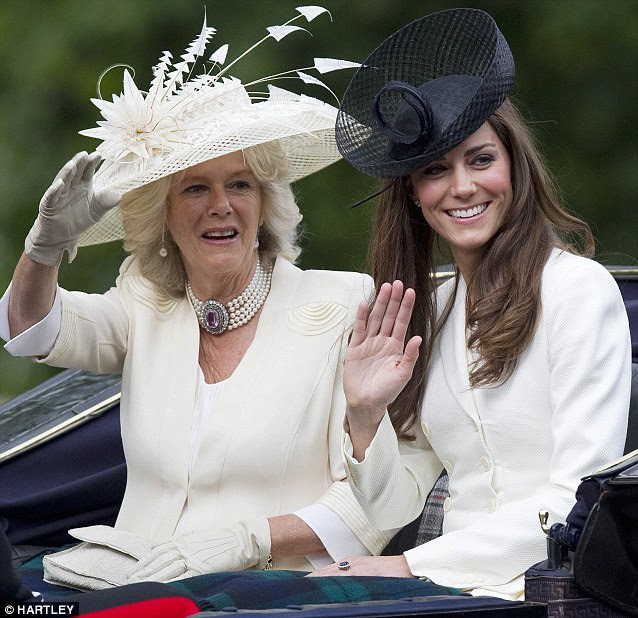 I could just make out Prince Harry by his bright blue beret and I could see Princess Eugenie, I completely missed the Queen and the others because of so many people pushing in the crowd.  (Photo: Daily Mail) 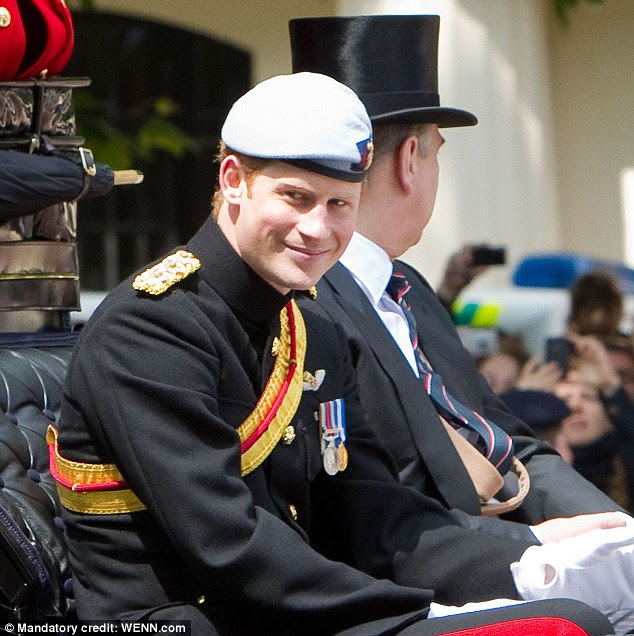 Here you can see some of the officers riding by in the procession. 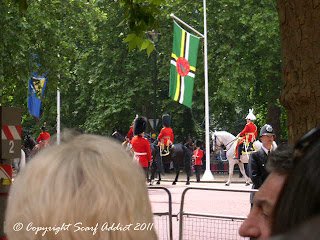 Here I managed to get a wobbly photo of the back of royals that rode behind the Queen - I think that the one with the blue sash just beneath the blue flag is Prince Charles and I can just make out Prince William's horse's tail LOL! 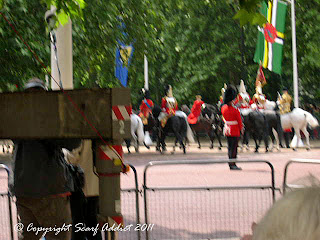 Here is slightly better pic of the procession of Life Guards/Household Cavalry. 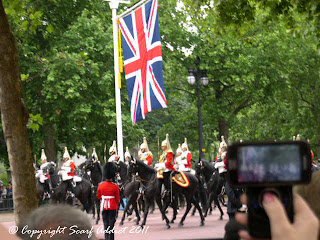 My photos are not good at all so I apologise for that but I hope those I have posted some from the newspapers show better what I missed!  It was still nice to have been there and maybe next year I will go specifically for the event and get there early to secure a better place - like at the front not the back!!
Posted by @Scarfie1 at 11:58 6 comments: