Ways with a Gavroche Part 2

Following on from the previous post now I am showing how to wear 2 gavroches together - this is a good way to make your gavroches much more versatile.  I also like that these are much lighter weight to wear. I have deliberately taken 2 contrasting gavroches and worn a contrasting top so you can see the interaction of the scarves more easily.

Next you can achieve some great knotted looks - get 2 gavroches and fold in the basic fold again and tie at the back of your neck either with a small knot or a small scarf ring so that you have the scarf ready to tie just like a normal 70cm or 90cm - there really are no limits to what you can do - I think that you can wear 2 gavroches in any knot that you would do with a 70cm or a 90cm:-

Ways with a Gavroche Part 1

I was asked a while back (sorry for the delay) about wearing gavroches - the tiny 16 inch squares of silk that Hermes sell.  So as I had a bit of time to spare I set about playing with some of my gavroche squares. First of all wearing just a single gavroche - not too many options here:-

While in Tromso it was nice to see the things they have in Norway for Christmas:-

As you know I have just been to Tromso in Norway with the aim of seeing the famous Northern Lights.

Tromso is quite a small place compared to UK towns.  There had been some snow in the days before my trip and it made the place look a bit messy!  Most days the weather was grey grey grey with lots of rain as you can see in the pictures of the town. 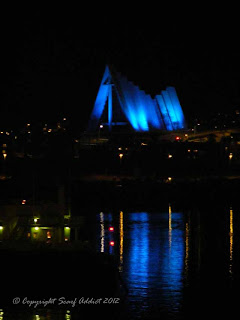 I am pleased to report I did see the lights!  Someone in my hotel told me not to expect them to be as bright as you see them in photos and they were right.  At the time I went Auroral activity was low so I saw a pale green display of lights - my camera was 100% useless although other people managed to get pictures but not one offered to email me one like I would have done - how sad.  Anyway it was better to SEE them with my own eyes than through a lens as it imprints on your brain /memory properly.  I saw one lot that looked like a long nose and smiling mouth with one eye and then a shower like formation - and another blob which become brighter then faded and moved around a little.  It was really something to be standing out in the zero temperatures in the middle of nowhere but seeing these displays - had I not been with a guide though I would have missed it.


In Tromso there were lots of small shops carrying different things but these DIY toys in a knitting shop caught my eye - you buy the bare doll (it has the hair) and then you knit the clothes like so:-

The prices in Norway were staggering.  A bottle of coke was equivalent of £3.98 compared to Tesco here at £1.08!!!!  Nearly 4 times what you would pay here in the UK truly shocking.  I found the prices totally prohibitive and so I did not manage to do more things.  I know I buy Hermes scarves but I could not justify the prices for simple things in Norway.  It was very much a window shopping holiday and thankfully my lovely hotel provided an evening meal free of charge!

If I go again I will go in Autumn as the Northern Lights guide said it is a good time to go and not so cold and the days are longer too.  I would also save up some money to fund trips as Norway does need serious money!

I hope you enjoyed seeing Tromso!
Posted by @Scarfie1 at 20:30 8 comments: