I called into a new vintage clothing shop yesterday near where I work and low and behold they had some Hermes scarves.  I found a 90cm mousseline in the Plumes design - I only have a gavroche in mousseline silk so the price for this 90cm was a bargain so it came home with me and was a perfect match with my salmon coloured sweater!  The pictures are not brilliant as I was in a hurry so please forgive me! 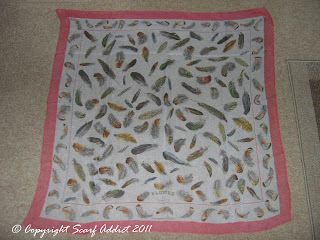 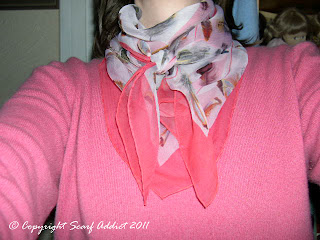 The colour was perfect with my sweater and the scarf is so light - just like a feather LOL!!
Posted by @Scarfie1 at 11:23 6 comments:

On my recent trip to Paris in January I struck very lucky at Hermès Rue de Sevres.  I had been looking for a "Printemps Ete 69 Automne Hiver 70" scarf but alas I had missed the boat at home...but when I went to RdS they had one.  However when the SA opened the drawer there was another grail peeping out at me.  I could not believe my luck - one of the first 70cm vintage scarves launched in 2007 - Jeu des Omnibus et Dames Blanche!  They had one!  I already have the pink one but am not too keen on that colourway but this one was the white/grey/black with a hint of red.  No way was I leaving it behind so I bought it!! 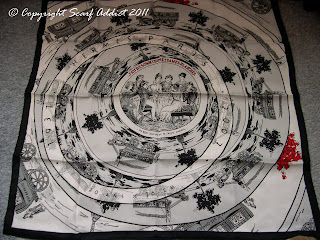 This design is one of Hermès oldest. 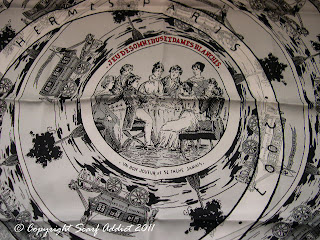 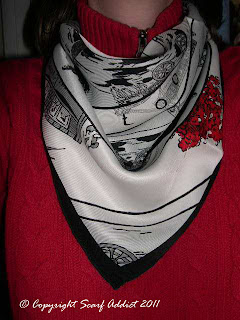 And here worn with my new mother or pearl moyenne MaiTai Collection scarf ring -one end slipped through the ring and the other pushed through the loop over the bar in the ring. 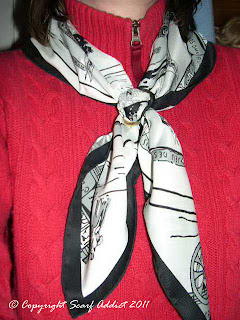 ﻿
After I left Hermès RdS with my new scarf I could not help thinking about the PE69AW70 I had left behind.  After going around the Bvlgari exhibition at the Grand Palais it was no good I HAD to go back to RdS to see if the scarf was still there - it was.  So I gave in and bought it - the SA remembered me - she told me this particular colourway was very popular with her Italian clientele!  So here it is, the 70cm big sister to my 2 gavroches in the same design:- 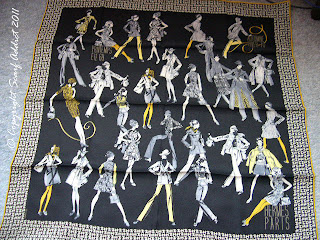 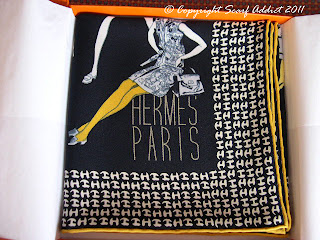 .
﻿
Here worn with my scarf ring as above - it was meant to be a waterfall knot but I am not sure I quite got it right - I need to practise! 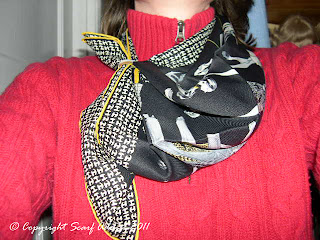 And the good old cowboy knot. 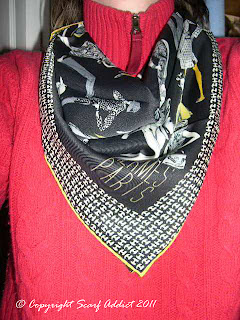 No trip to Paris would be complete without buying some Ladurée macaroons and I found this lovely Moon and Sun box which I had filled solely with Praline flavour macaroons - my favourite! 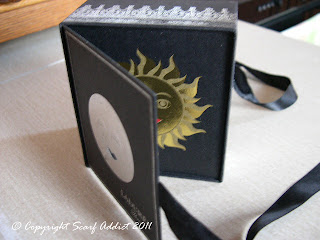 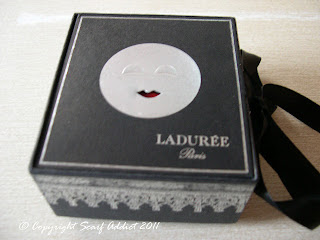 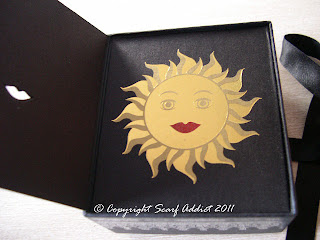 Following some requests for a little how to video of the Butterfly "Knot" I have done one which I hope will help show how to achieve this very pretty look easily!


First I folded them in the basic fold and then fastened the two gavroches using my petite horn scarf ring from the MaiTai Collection - just pass each end through the ring to secure:- 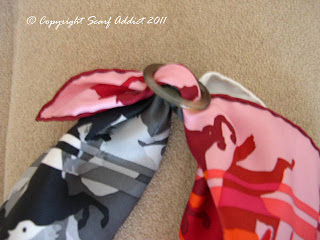 Then put the scarves around your neck and get your scarf ring - follow the video and hopefully you will have a lovely Butterfly Knot!  Just a little word of caution - do check that the scarf ring you use is on tight as you do not want it to slip off - I used one that was too big for my 70cm once and it fell off and got damaged on the floor:-(